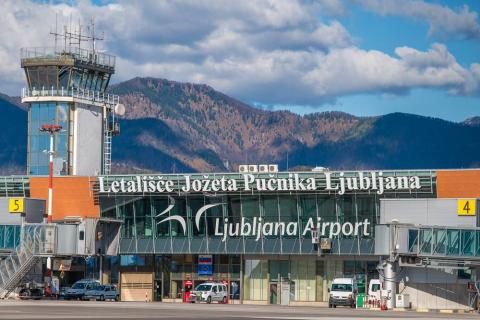 Brnik – Budget carrier FlyDubai launched scheduled flights between Ljubljana and Dubai on Friday in what is a culmination of ten-year efforts by the Ljubljana Jože Pučnik Airport. The connection will also be important for connectivity with Asia and Oceania.

FlyDubai will operate three flights a week with a Boeing 737 max to offer the first direct flight connection between Slovenia and the United Arab Emirates.

Flying under the Emirates brand, passengers will be able to easily continue their journey from the Dubai hub.

According to Zmago Skobir, the head of Fraport Slovenija, which manages the Ljubljana airport, negotiations with FlyDubai and its owner, the Emirates, started in 2012.

A key breakthrough in the talks was the closing of an agreement on air transport between Slovenia and Dubai.

FlyDubai CEO Ghaith Al Ghaith said the Slovenian government, agencies and the airport had been very persistent, so the company decided to give the connection a try although some of Slovenia’s neighbouring countries already have a direct link to Dubai.

Jeyhun Efendi, senior vice president of commercial operations & e-commerce, said FlyDubai started flying to this region ten years ago, first to Belgrade, Serbia. Other connections followed, and just yesterday the link with Zagreb, Croatia, was restored after being suspended during the epidemic.

Al Ghaith said that because of the Expo Dubai now was a good time to set up new connections. He is confident that the new route, currently envisaged in the winter schedule, would stick.

He sees great potential, since both Slovenia and Dubai are attractive tourist destinations and Dubai is also a hub with over 200 flights to different exotic destinations.

Bookings and reservations of the flights are promising. About 100 passengers arrived in Ljubljana with the first flight today and 80 flew to Dubai, which is fighting the Covid-19 pandemic with high vaccination rate and frequent testing.

The lowest price for a return ticket was EUR 280, but due to high demand prices have already climbed to around EUR 400.

The arrival of FlyDubai is very important for Slovenia’s connectivity with Dubai and wider, Skobir said. “Asia and Oceania are at least as accessible through Dubai as they are through Istanbul,” he said. Apart from Slovenians, he is also counting on passengers from Austria and Italy.

Efendi said the last couple of years had been very weird for the aviation industry. “Now we can see the light at the end of the tunnel and this connection comes exactly at a time when travel is being resumed.”

It took a lot of effort, money and energy to make sure Slovenia remains connected to the world, he said, adding that the government had lowered airport tax to Fraport Slovenija and granted it EUR 5 million in special aid.

Skobir said the money had been spent on current operations and the finishing of the new passenger terminal. So far the company has lived off its accumulated profit and fresh revenue, but next year a short-term loan will probably be needed, as air traffic is still picking up relatively slowly.