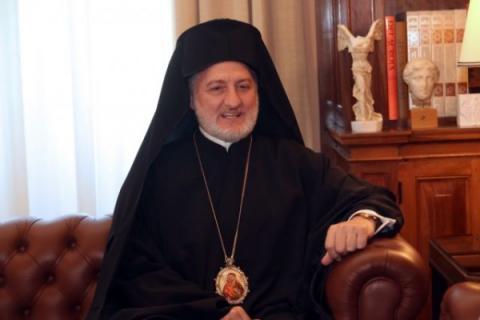 Prime Minister Kyriakos Mitsotakis and Archbishop Elpidophoros of America will meet today after the government's stinging criticism of the archbishop over his presence at an event attended by Turkish Cypriot leader Ersin Tatar, who is promoting a two-state Cyprus settlement with international recognition of the sovereignty of the Turkish occupation regime in the north of the island.

The PM's decision came after the government spokesman publicly expressed the government's dissatisfaction over the Archbishop's move and straight on the heels of a public apology by Elpidophoros. Mitsotakis

The archbishop's presence at the event initially led to a cancelation of the Mitsotakis-Elpidophoros meeting which, however, was reversed following the archbishop's expression of regret regarding his action and his sorrow for the pain that he inadvertently caused to his Cypriot and Greek-American brethren.

Elpidophoros attendance at the event, which was presided over by Turkish President Recep Tayyip Erdogan and UN Secretary General Antonio Guterres caused a backlash in Cyprus, Greece, and the Greek-American community.

Elpidophoros issued a lengthy statement in which he said he stands by the Greek Cypriot people and their just cause and that just as the Cypriots after the 1974 invasion and occupation became refugees in their own land, he and his family too were uprooted from their home in Istanbul and moved to Greece in the early 1970's, when events in Cyprus and Greek-Turkish tensions led the Turkish state to take it out on the Greek minority in Istanbul.

"As a Greek of Constantinople [as Istanbul is still called in Greek], my family and I have experienced the...