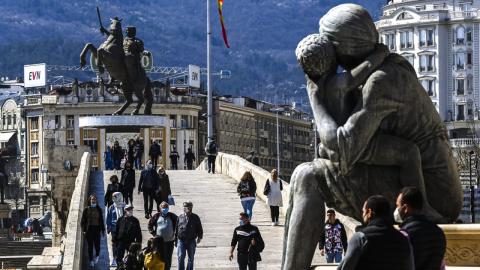 The State Statistical Office has said it is optimistic about successfully wrapping up the nationwide head count, the first since 2002, by the September 30 deadline, having so far registered more than 1.3 million residents in more than 405,000 households.

"We are doing literally all we can so that no one is left unregistered. We are very persistent, maybe even pesky, but we are not giving up," Apostol Simovski, the head of the State Statistical Office, told the Faktor news website on Thursday.

He added that census-takers are managing to register some 100,000 people per day on average. So far, the turnout from the diaspora has been relatively weak. The number of people who have so far registered themselves online from abroad is nearing 200,000.

If this pace continues, the numbers so suggest that the results will show what many experts, including Simovski, have predicted - that compared to the 2.1 million registered residents at the last census in 2002, the country now has fewer people.

Simovski's earlier estimates were that the country does not have more than 1.8 million residents, mostly due to economic migration over the past two decades. But some estimates go even lower, predicting an outcome that might show as few as 1.5 million people.

Simovski cautioned that the fact that the census-takers have so far collected data from 1.3 million people is not enough to make judgments about the final statistics just yet, as these will be determined through later cross-referencing of the data collected.

"We are saying that we have so far registered 1.3 million people, but there might be citizens who were registered twice, first at one location and then at another, which does not constitute a mistake, because we will later cross...