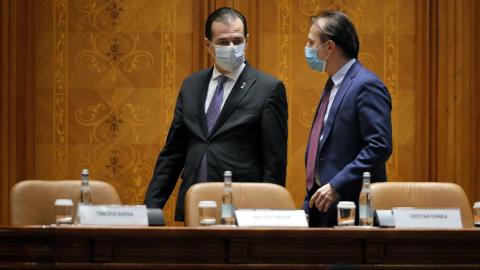 In a tight contest, Prime Minister Florin Citu will battle ex-Prime Minister and current head of Romania's Chamber of Deputies, Ludovic Orban, for the leadership of the centre-right National Liberal Party, PNL at a party congress on Saturday.

Florin Citu has a strong ally in President Klaus Iohannis, who openly endorsed him this week and will be present at the party congress on Saturday.

"I encourage Florin to continue and not to be afraid about the Liberals remaining in power… Florin Citu has no reason to resign or be fired," said Iohannis.

Iohannis has been accused of being behind the recent break-up of the PNL's governing coalition with the Save Romania Union and the Party of Liberty, Unity and Solidarity, USR PLUS, which has meant that the party's hold on power has weakened.

USR PLUS withdrew from the coalition after Citu dismissed USR PLUS's Justice Minister Stelian Ion from the cabinet.

The sacking came before the leaders of some of the country's anti-graft institutions were due to be appointed, and it's been alleged that Iohannis wanted to ensure that these institutions would be run by people close to him and the PNL.

After withdrawing from the government coalition, USR PLUS and the right-wing Alliance for the Union of Romanians filed a no-confidence motion against their former ally Citu, stating that they would only return to a governing alliance with the PNL after Citu's resignation as premier.

The no-confidence motion will be voted on in parliament soon after the PNL's internal contest for leader.

In the internal party contest, which is held every four years, Citu has strong allies within the party's leadership, while Orban has been in the PNL for about 30 years, and has strong partners in the local...