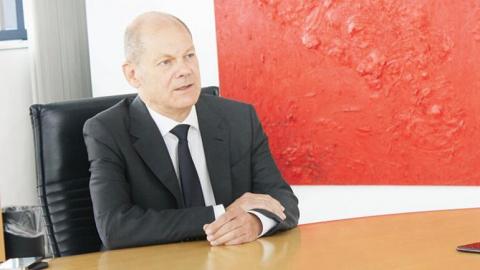 Turkey and Germany have special relations due to the millions of Turks who immigrated 60 years ago, German social democrat politician Olaf Scholz told daily Hürriyet in an interview days before the Bundestag elections that will end the 16-year rule of Christian Democrat Chancellor Angela Merkel.

"There is a special bond between Germany and Turkey. People connect to us," Scholz said, referring to the Turks living and working in Germany since the 1960s after Turkey and Germany signed a labor recruitment agreement.

"Germany became a country of immigration with this agreement. By offering families a business perspective, Germany has become a country of hope where people find happiness and their children can go to school. This is a great prosperity for Germany," he suggested.

Scholz will run as the SPD's candidate for German chancellor and public opinion researches indicate he is very close to winning the polls on Sept. 26. On a question why Turks eligible to vote in Germany should prefer the SPD, the social democrat candidate stressed that his party promises to establish more respect and unity within the German society.

"Because the SPD is the only party that can fulfill the duties ahead and fight for a better future in unity and respect. Nobody should look down on anyone else," he stressed.

Scholz maintained that the integration of Turkish immigrants went well in general thanks to the education system of Germany, but said, "I support that the education system should be ameliorated. In some cities, half of the parents and grandparents of primary school students are not of German descent. This is our reality. We should act accordingly."

Expressing his hope that those whose parents emigrated from Germany...