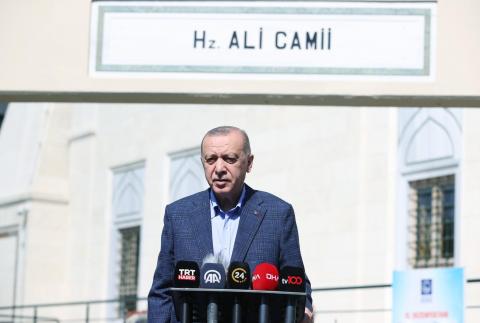 As two NATO countries, Turkey and the U.S. should be in a very different position, the Turkish president said on Sept. 24.

Speaking to reporters in Istanbul after the Friday prayer, Recep Tayyip Erdoğan said the "U.S. is currently supporting terrorist organizations, beyond expectation", adding that "instead of fighting terror groups, the U.S. provides them with considerable amount of weapons, tools and vehicles."

Erdoğan noted that Turkey, as a NATO member, should share this fact with the whole world, referring to U.S. support to YPG/PKK terror group.

Responding to a question about his upcoming meeting with Russian President Vladimir Putin, Erdoğan said his expectation from him is "very different."

"The regime in Syria poses a threat in the south of Turkey. So, as a friend to Russia, I expect from Putin and Russia a different approach as a requirement of solidarity," he said.

"We need to fight this together in the south," he added.

The U.S. is not interested in Syria these days, said Erdoğan, noting that Russia, Iran, and Turkey "should discuss ways to create a peace zone in Syria."

"We are working on to further improve our bilateral relations with Russia as we have the target of reaching a $100-billion bilateral trade volume with Russia," Erdoğan said.