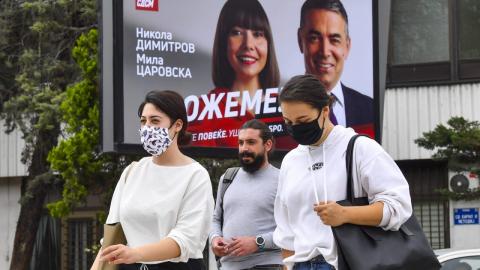 The forthcoming local elections on October 17 will again be dominated by male mayoral candidates, official data on candidacies that was recently published by the State Electoral Commission reveals.

Out of a total of 298 candidates who will be competing for mayoral seats in the country's 81 municipalities, only 26, or less than nine per cent, are women, the data shows.

All the main parties and blocs for the elections have opted once again to favour men as candidates.

The main ruling Social Democrats, who over the past few years have boasted about promoting gender equality within their own ranks, have nominated a total of 68 mayoral candidates. But only five of them are women.

The main opposition party, the right-wing VMRO DPMNE, is offering even less representation for women, with only three female candidates out of a total of 62 mayoral contenders.

Of the ethnic Albanian parties, the junior ruling Democratic Union for Integration, DUI, has only one female candidate, the current mayor of the town of Tetovo, Teuta Arifi, out of a total of 19 mayoral candidacies.

Two ethnic Albanian opposition parties, Alliance for Albanians and Alternativa, are entering the race with 15 candidates, all male.

The same is true for the BESA party, which supports the government, and is fielding 11 male candidates.

The only two political forces with a somewhat more equitable gender balance are the centrist bloc consisting of Democratic Renewal of Macedonia, DOM, the Liberal Democrats, LDP, and the far-left party Levica.

Meanwhile, of the 27 candidates who will be running as...