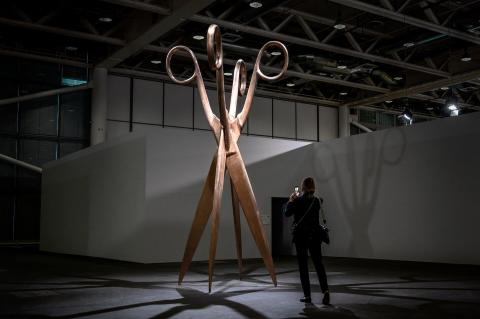 Art Basel, the world's top contemporary art fair, has returned to the Swiss city after a year's gap due to COVID-19 curbs, drawing hordes of wealthy buyers and breathing life into a market devastated by the pandemic.

Despite the near-total absence of U.S. collectors, a key client base for artists and galleries, big-money buyers were back on Sept. 21 to preview the works before the event opened to the public for three days from Sept. 24.

After last year's cancellation, some 272 galleries from 33 countries returned to showcase both emerging artists and major contemporary art figures such as David Hockney, Frank Bowling and Olafur Eliasson.

Exhibitors were impatiently awaiting Art Basel's return, but at the end of August, the United States advised against travel to Switzerland, raising fears that the pandemic would spoil the comeback.

"We had an environment which was suddenly very tense," Art Basel's global director Marc Spiegler told AFP. But he said the fair had tried to remove all traces of the pandemic inside the halls so that visitors "could focus on the artists."

But once the doors opened, he said the atmosphere inside was "buoyant."

"People are excited to see each other again... to see great art in front of them, and not through a screen," he said.

After Tuesday's opening day, several large galleries were already lining up their first seven-figure sales -- $6.5 million for an oil on canvas work by Philip Guston at the Hauser and Wirth gallery; $5-5.5 million for a Keith Haring painting at Gladstone, and $3 million for a Dan Flavin installation at David Zwirner.