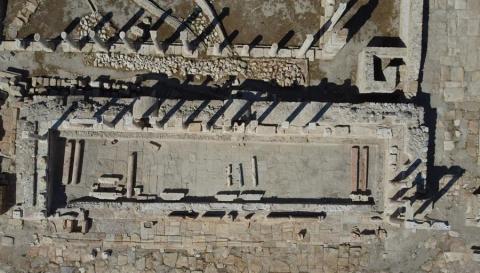 Ongoing excavations in Turkey's southwest have revealed details on earthquakes from an ancient period.

Excavations and restoration efforts that began in 2012 in the ancient city of Tripolis in the southwestern province of Denizli's Buldan district revealed skeletal remains as well as the effects of earthquakes on structures at the site.

In the examinations conducted on the ruins of the ancient city, which was home to many civilizations, the skeletal remains are thought to belong to those who may have died due to earthquakes at the time.

The most striking fact learned from this work is that the buildings in the ancient city, whose history dates back to 5,500 BC, were repeatedly destroyed by earthquakes and repaired, said Bahadır Duman, head of the excavation team.

Duman also noted that life in the site area continued on despite the earthquakes.

"During the excavations, we determined that in the rooms of some houses, animals and people were left under the debris during the earthquake," he added.

Furthermore, Duman said the inscriptions and ruins indicate that the city was exposed to several major earthquakes.

"From the inscriptions and ruins, we think that the city was exposed to four major earthquakes. An inscription dating back to the 4th century AD states that large public buildings were damaged in the earthquake that took place in the city," he added.

Duman also said that at least 11 people died from those earthquakes, including some children and young adults.