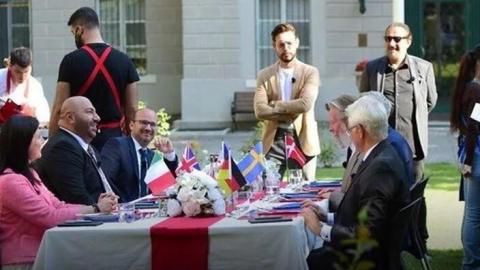 The heads of the diplomatic missions of five European countries to Turkey's biggest metropolis have become jury members on MasterChef, a competitive cooking game show based on the original British version.

The consul-generals of Sweden, Italy, Germany, Denmark, and the United Kingdom to Istanbul sat on the panel of the jury in the latest episode of the popular show, tasting some traditional examples of Turkish cuisine.

Kenan Poleo, the British envoy with Turkish Cypriot roots, listed his favorite examples from Turkish cuisine such as iskender, lahmacun, eggplant and okra, in his family's native language with a Londoner dialect.

While German diplomat Johannes Regenbrecht stated that he likes döner kebab, Italian envoy Elena Sgarbi said that she helds in esteem all Turkish dishes, but she likes börek the most. Denmark's Thierry Hoppe noted that she preferred mantı and pide.

The last episode of the series was shot in the Swedish Consulate on İstiklal Avenue, hosted by the Swedish diplomat Peter Ericson.