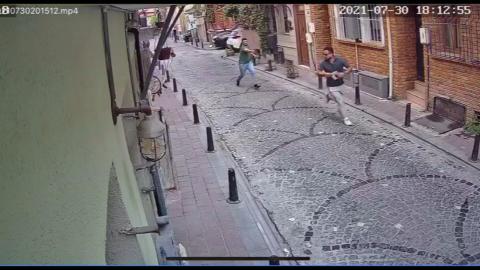 The historical neighborhood has changed in the last 10 years under the direction of Istanbul's city-wide renewal plans, becoming a favorite attraction point of cinema companies that want to use it as an outdoor studio.

However, the area has been under the spotlight with gunfights between illegal parking lot operators and gangs trying to extort store owners in the last few years as its reputation grows in Turkish media.

One of the latest victims of these thugs was Enes Kaya, who organized events to increase children's interest in cinema in the association he founded.

Kaya was shot in the legs in the middle of the street and threatened with death by a gang who wanted to turn a rented land into a parking lot. His wife's shop was damaged by the stoning of the same group.

Sharing his experiences on social media after the attack on his wife's shop, Kaya said threats did not stop although he complained to the police.

"I complained, but then they followed me and attacked me. One of the four bullets hit my knee," he noted, adding that the area was turned into a parking lot by assailants while he was being treated in hospital.

Known as the former Jewish quarter of Istanbul, Balat has merged Turkish, Greek, Armenian and Latin influences, giving any visitor a unique, eye-catching experience to visitors.

However, the internal migration experienced since the 1990s and the fact that the houses have changed hands at very...