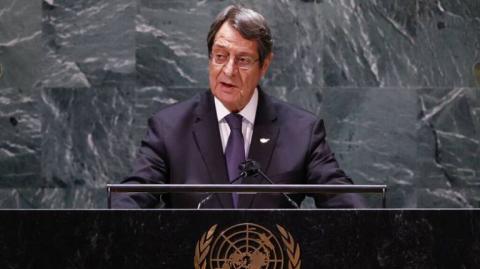 In his address to the UN General Assembly to Cyprus' President Nicos Anastasiades launched a scathing attack on Turkey on everything from its stance toward Greece and Cyprus in the Mediterranean to its posture on Cyprus talks, to its stance on Cyprus' gas deposits and its destabilising role in the Syria and Libya.

While Turkish President Recep Tayyip Erdogan and Turkish Cypriot leader Ersin Tatar insist on the establishment of two states on the island, which violates the UN framework (a bi-zonal, bi-communal federation on which the two parties have agreed for decades), Anastasiades proposed that talks resume where they left off at the failed 2017 negotiations at Crans-Montana, Switzerland, building on convergences that were achieved there.

Anastasiades said negotiations should focus on the six elements of a solution enumerated by UN Secretary General Antonio Guterres at Crans-Montana.

Turkey's insists on perpetuation of Treaty of Guarantee

"During the Conference, the Secretary General identified a framework of six elements that should be discussed interdependently and comprehensively, including the Chapter of Security and Guarantees, in order to reach a strategic agreement that would pave the way forward for a comprehensive settlement. Unfortunately, despite our positive engagement and the submission of credible and realistic written proposals, the negotiations were unsuccessful due to Turkey's inflexible stance and insistence on maintaining the anachronistic Treaty of Guarantee and the right of intervention, as well as a permanent presence of troops. Progress in the Chapter of Security and Guarantees is an essential element in reaching an overall agreement and in building trust between the two communities in relation to...