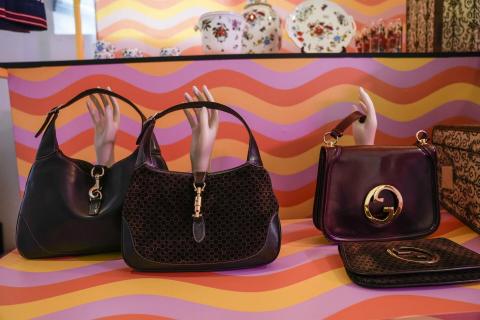 "Yes, I do this work to tell stories. But I also do it because I truly love objects," he told reporters in Milan.

"Completely out of the blue, I got a message from Gucci. I thought it was an advertisement or spam," Ahluwalia said.

"When I realized it was real, I was extremely happy."

Michele said the brand has a vast network of sources for vintage Gucci, which it has been tapping to rebuild its archive.

The launch includes a white Jackie bag meticulously cared for by its previous owner that he wanted to keep for himself.

Then, laughing, he said, "Who knows, maybe I will log on tonight and buy it myself!"

Gucci has stepped away from the Milan Fashion Week calendar, finding its own rhythms. Its next show is on Nov. 3 in Los Angeles, coinciding with the 10th LACMA Art, Film Gala, which Gucci is sponsoring.