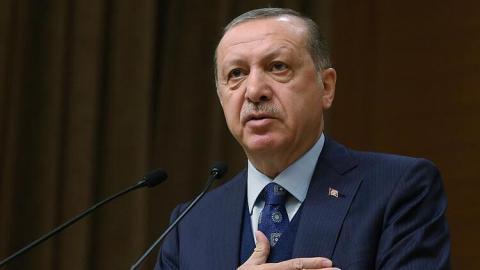 No country can interfere in Turkey's future purchases of defense systems, President Recep Tayyip Erdoğan has said, criticizing the United States for not delivering the five F-35 stealth fighters that Turkey has already paid for.

"In the future, nobody will be able to interfere in terms of what kind of defense systems we acquire, from which country and at what level," Erdoğan told CBS in an interview during his visit to the U.S. to attend the U.N. General Assembly last week.

According to a brief transcript of the interview, on a question whether Turkey is planning to purchase another round of S-400s from Russia. "Nobody can interfere with that," Erdoğan said. "We are the only ones that can make such decisions."

Turkey deployed the first batch of the Russian air defense systems in mid-2019, which triggered sanctions from the U.S. It was excluded from the F-35 joint fighter program and five aircrafts Turkey has paid for have not been delivered.

Turkey had to buy the S-400s after its demand for the purchase of the Patriot system was rejected by the U.S., the president stressed, adding, "I explained everything to President Biden," referring to their face-to-face meeting in mid-June in Brussels. Nobody can question Turkey's decision to buy weapon systems after rejecting Turkey's demand to procure weapons, he suggested.

The U.S. continues to warn Turkey that the acquisition of the second batch of S-400s would have consequences in line with the Countering America's Adversaries through Sanctions Act (CAATSA).

The Russian system can harm the NATO alliance through its ability to detect detailed information about F-35 jets, the U.S. claims. Turkey has many times proposed to establish a technical team to...