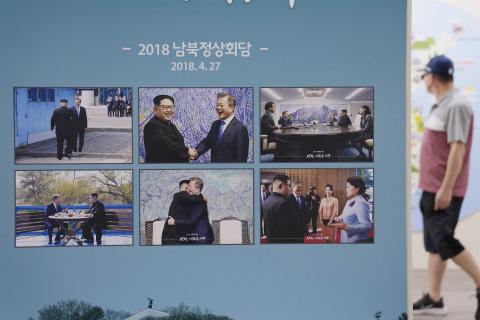 North Korea is willing to consider another summit with South Korea if mutual respect between the neighbors can be assured, state news agency KCNA said on Sept. 25, citing Kim Yo Jong, the sister of the North's leader Kim Jong Un.

South Korea welcomed the prospect on Sept. 26, with the Unification Ministry saying it expected to swiftly engage in talks with Pyongyang, while urging the need to restore a hotline link between the two.

Kim's comment came after the North urged the United States and South Korea last week to abandon what it called their hostile policy and double standards towards it, if formal talks are to be held on ending the 1950-53 Korean War.

North Korea's pursuit of nuclear weapons has complicated the question of a formal end to the war, which halted with an armistice, rather than a peace treaty, leaving U.S.-led U.N. forces technically still at war with the North.

"I think that only when impartiality and the attitude of respecting each other are maintained, can there be smooth understanding between the north and the south," said Kim Yo Jong, who is a powerful confidante of her brother.

Constructive discussions offer a chance for solutions on issues such as "the re-establishment of the north-south joint liaison office and the north-south summit, to say nothing of the timely declaration of the significant termination of the war", Kim said.

Speaking on Sept. 21 to the U.N. General Assembly, South Korean President Moon Jae-in had repeated a call for a formal end to the war, but later said time was running out for such progress before his term ends in May.

North Korea has sought an end to the war for decades, but the United States has been reluctant to agree, unless it gives up nuclear weapons.