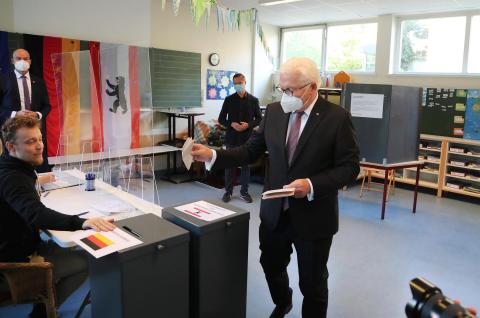 Germans voted on Sept. 26 in one of the most unpredictable elections in its recent history, with Angela Merkel's conservatives and the center-left Social Democrats in a tight race for her crown as she prepares to leave the political stage.

The epochal election ushers in the end of 16 years in power for Merkel and places Germany, a byword for stability, in a new period of uncertainty.

Opinion polls show the race for the chancellery headed for a photo finish, with Merkel's CDU-CSU conservative alliance on around 23 percent, just behind the center-left Social Democrats on 25 percent - well within the margin of error.

"We will certainly see some surprises on Sunday," said Nico Siegel, head of the Infratest Dimap polling company.

Despite the SPD's lead in the polls, a victory for the conservatives "can't be ruled out", he said.

"The race for first place is wide open."

Around 40 percent of Germany's 60.4 million eligible voters have said they are undecided, while the same proportion have already cast their ballots by post - including Merkel herself.

President Frank-Walter Steinmeier was among the early voters, declaring that "to vote is to live democracy" as he cast his ballot in Berlin.

At a polling station in Aachen in western Germany, voter Ursula Becker, 62, told AFP: "This year it's quite exciting who it will be, and it's always important who governs."

The battle for the chancellery has boiled down to a contest between two men: Finance Minister and Vice Chancellor Olaf Scholz, 63, of the SPD, and Armin Laschet, 60, of the CDU-CSU.

But with both parties likely to fall well short of the majority needed to govern alone, there could be...

Russian Politician demanded the Assassination of the German Foreign Minister

NATO to Deploy AWACS Aircraft from Germany to Romania

Defense deal moving ahead without asterisks

Local media: Plane with 72 people on board crashes in Nepal