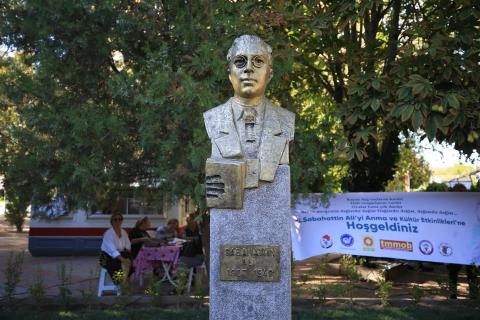 The world-famous Turkish novelist and poet Sabahattin Ali has been commemorated in a string of ceremonies held in the northwestern province of Kırklareli on the 73rd anniversary of his killing.

The first ceremony for Ali was held in front of the author's monument on İstasyon Street, one of the busiest spots of the province located on the Bulgarian border.

"We are in an effort and intense tempo to protect not only Sabahattin Ali, but all our values," he noted.

Between 1932 and 1948 Ali was arrested several times and served some months in prisons across the country for criticizing the government and nationalism.

In 1948, he decided to go abroad after being released from prison, but could not obtain a passport from the government, eventually prompting him to cross the border illegally.

He made a deal with a truck driver to cross the Turkish-Bulgarian border, however, the driver turned out to be an agent of the Turkish secret service, who killed the novelist in 1948.

His short novel "Madonna in A Fur Coat" is considered one of the best novellas in Turkish literature. Its translations have recently hit bestsellers lists and has sold a record number of copies in several countries.

In 2016, Penguin Classics published an English translation of the novel, which centers around a post-World War I love affair between Turkish student Raif Efendi and German singer...