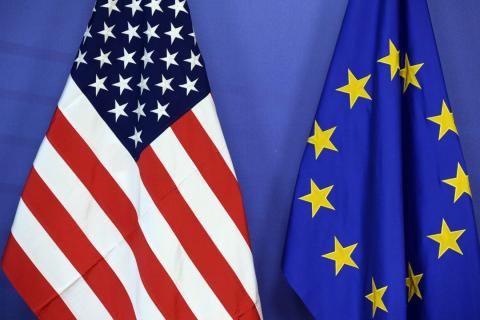 High-level talks will begin in the U.S. city of Pittsburgh tomorrow despite efforts by Paris to delay the meeting in retaliation for a pact between the United States, Australia and Britain - dubbed AUKUS - that saw Canberra scrap a multi-billion-dollar submarine order from France.

The EU-U.S. Trade and Tech Council was set up after a summit in June to look at issues including trying to attune their strategies on regulating internet giants and defend democratic values.

The council came at the request of the Europeans, who are seeking concrete signs of increased transatlantic cooperation after years of tension under former president Donald Trump, especially over trade.
U.S. President Joe Biden's administration will be represented by Secretary of State Antony Blinken, Trade Representative Katherine Tai and Commerce Secretary Gina Raimondo.

On the European side, EU executive vice presidents Margrethe Vestager and Valdis Dombrovskis will lead talks.
Vestager, the EU's tech policy supremo, said the talks would attempt to enhance cooperation "in the areas where there is a shared sense of values being two big, old democracies."

Unspoken in her comments was the rise of China, with Washington understood to be pressing its EU partners to join forces in isolating Beijing on the global stage.

This is being resisted in Europe, where powerful member states France and Germany are reluctant to blindly follow Washington's increasing assertiveness.