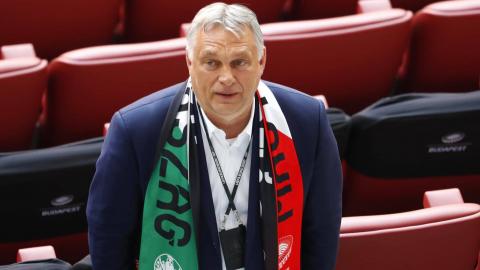 Balazs said that if he were in government, he would have channelled more money into educating young people and providing access to other sports.

"If you consider the stadium in his native village, Felcsut, it reminds me of the Scornicesti stadium in Romania during the Ceausescu era. The results are the same, and maybe this stadium won't be used but will be destroyed one day," said Balazs, referring to the late communist dictator Nicolae Ceausescu, who ordered the construction in 1975 of a 30,000-capacity stadium in his hometown for local football team FC Olt Scornicesti, which was then rapidly promoted to Romania's top league.

The reference to Romania is apt, given that Orban combines his football passion with revanchist goals in neighbouring countries like Romania, Serbia, Slovakia, Slovenia and Croatia, where Hungary's government is investing considerable amounts of money in building arenas, setting up academies or sponsoring local football teams in areas with sizable ethnic Hungarian minorities.

However, Orban's 'football diplomacy' is worrying many in Central Europe, the Balkans and beyond, given its potential to stoke tensions in a region well known for ethnic conflict. Critics have long accused the right-wing government of Orban and state bodies under the thumb of his ruling Fidesz party of "rewriting history" and engaging in "historical revisionism", particularly with...