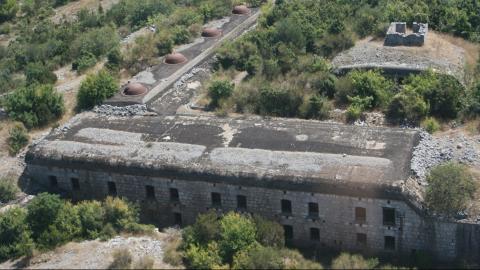 Kosmac was garrisoned by heavily-armed Austrian troops until 1918, when the empire collapsed and the coastal strip of Montenegro was united with the post-World War One Kingdom of Yugoslavia.

Today, the fortress is owned by the Montenegrin Institute for the Protection of Cultural Monuments, but in reality, like the others left behind after the empire's retreat, it has been neglected for decades, abandoned to the elements.

In 2005, the Institute announced a 1.7 million euro project to restore the fortress and build a hostel and apartments nearby, a potential boon for local residents. But, as Martinovic recalled, "nothing happened and the fortress is still neglected." It's not the only one.

Over almost a century of Austro-Hungarian control over a part of Montenegro, a string of fortifications was built from the Bay of Kotor to the southern end of the Montenegrin coast, protecting the empire's borders at the Adriatic Sea.

Enthusiasts have struggled to convince others, including successive governments, of their unique cultural value.

"Within the public the fortification remains are seen as scattered buildings, with no knowledge of how fantastically organised a system it was," said Montenegrin publicist Radojica Raso Pavicevic, author of a book about the fortresses.

"Only a small number of enthusiasts and foreigners showed interest in this heritage, while there is no official information about what the state plans to do."

According to Montenegrin authorities, of over 2,000 sites designated as cultural monuments, 85 per cent are preserved. Four sites in Montenegro feature on the list of...