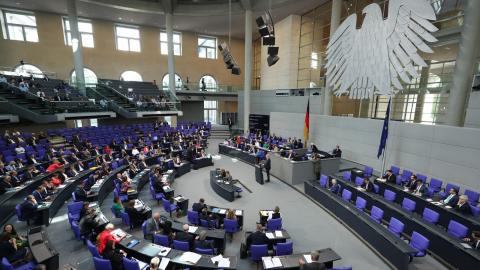 Most of the MPs with Balkan origins are from the centre-left Social Democratic Party, which came first in the polls, or from left-wing parties.

More than 100 politicians with Turkish backgrounds ran for office in Sunday's general elections and 18 of them have secured seats in Bundestag.

Nine of them are from the Social Democratic Party, SPD, five from Green Party, and three from the Left Party. Only one is from the former governing party, the centre-right Christian Democratic Union, CDU of outgoing Chancellor Angela Merkel.

"I want to bring in education reforms, more funding for education, which would see children attending school for extended hours, a deeper focus on better learning of the German language, better cultural orientation, and better integration in society," Cansel Kiziltepe, who is one of SDP's new MPs with a Turkish background, said before the election in an interview with Turkey's state broadcaster TRT.

Cem Ozdemir, who is vice-president of Green Party, is one of the most senior MPs of Turkish origin in Germany and is expected to become transport minister in a new cabinet led by the SDP if it can form a governing coalition.

In addition to the 18 MPs with a Turkish background, one politician with Greek roots, Takis Mehmet Ali, who is originally from Turkey, also entered the German parliament.

"I will always carry a part of Bosnia in me… I will try to integrate Bosnia and the countries of the former Yugoslavia into the EU in German foreign policy," Ahmetovic said after his election victory.

Josip Juratovic from the SDP and Irene Mihalic...