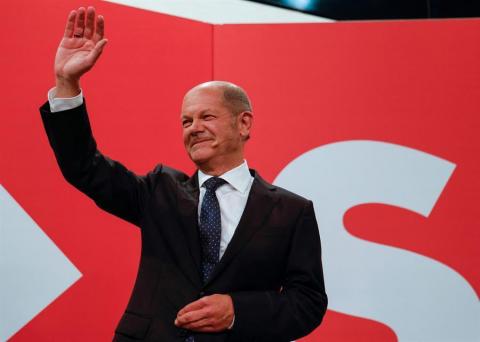 Germany braced for a period of political unpredictability on Sept. 27 after the Social Democrats narrowly won a general election but faced a rival claim to power from outgoing Chancellor Angela Merkel's conservative camp.

The Green party placed third at 14.8 percent, its best result yet but still short of expectations.

The SPD's chancellor candidate, Finance Minister and Vice-Chancellor Olaf Scholz, said he had a clear mandate to govern.

Despite the poll drubbing, his conservative rival Armin Laschet also claimed the right to try to build the next government- kickstarting a scramble for possible coalition partners.

For a country used to political stability after 16 years of Merkel's steady leadership, the coming weeks and months promise to be a rocky ride.

Western allies are watching closely, aware that domestic preoccupations could blunt Germany's role on the international stage and create a leadership vacuum in Europe.

Laschet, 60, and Scholz, 63, both said their goal was to have a new government in place before Christmas.

Citizens "want a change in government," said Scholz, who ran an error-free campaign that cast him as a safe pair of hands, contrasting sharply with Laschet's series of gaffes.

The Sueddeutsche newspaper said the vote revealed that "Germans longed for change, but lost their nerve a bit."
In the fractured political landscape of the post-Merkel era, the most likely outcome will be a three-way alliance -- ending...