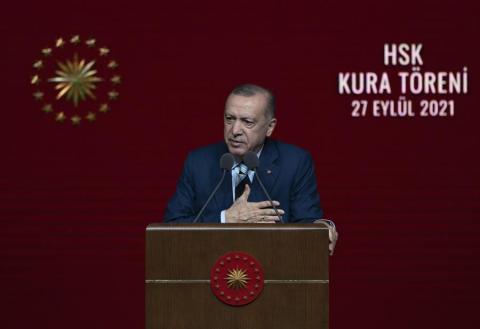 The government's priority in the new legislative year is to continue to reform the entire judicial system in order to upgrade rule of law and democracy in Turkey, President Recep Tayyip Erdoğan has said, urging the judges and prosecutors to listen only to their conscience while doing their job.

"In the upcoming period, it will be our priority to strengthen the functioning of the justice system and maximize trust in the judiciary and its decisions," Erdoğan said at a meeting for the recruitment of new judges and prosecutors on Sept 27 in the capital Ankara.

"We have always kept alive our will to reform justice in the past 19 years," Erdoğan said, recalling that it was the key to the government's success in the field of justice and development.

"We have exerted efforts to grow Turkey not only in the field of economy and democracy but also in the field of fundamental rights and freedoms. We quickly implemented our judicial packages," he stated.

Recalling that the government had unveiled two key reforms in recent years, one on the judicial strategy and the other on the human rights action plan, Erdoğan said that more steps would follow in a bid to facilitate people's reach to justice and function judicial bodies more smoothly.

No country defying justice, freedoms and democracy can stand on its feet as seen in the case of Syria and other regional countries, Erdoğan said, vowing that Turkey would continue its efforts to assure that justice functions in the best and quickest way.

The government has been constructing a new and modern building for the service of justice but a sound and fair justice requires more than new premises, the president said. "The basic condition [for justice] is the existence of a...