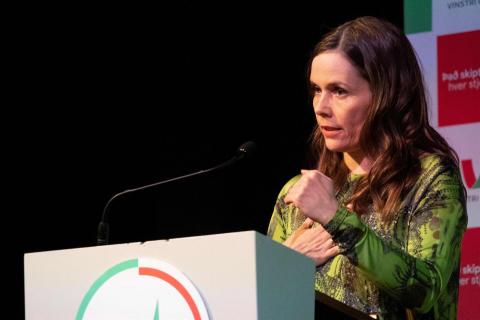 Iceland believed briefly on Sept. 26 it had become the first country in Europe to have a women-majority parliament after its election a day earlier, but a recount showed it fell short, an election official told AFP.

Of the 63 seats in the Althing parliament, 30 were won by women, or 47.6 percent, following the recount in one of Iceland's constituencies, the head of the electoral commission in the Northwest constituency, Ingi Tryggvason, said.

Earlier on Sept. 26, projections based on final results had credited women with 33 seats, or 52 percent.

"We decided to hold a recount because the result was so close," Tryggvason said, adding that no-one had requested the recount.

Further recounts in other parts of Iceland were not ruled out.

No European country has had more than 50 percent women lawmakers, with Sweden until now coming closest at 47 percent, according to data compiled by the World Bank.

Iceland has long been a pioneer in gender equality and women's rights, and has topped the World Economic Forum's ranking of most egalitarian countries for the past 12 years.

The country, which was the first to elect a woman as president in 1980, had been quick to celebrate the presumed milestone.

"I am 85, I've waited all my life for women to be in a majority... I am really happy," Erdna, a Reykjavik resident, told AFP earlier.

"This is yet another example of how far we have advanced on the road to full gender equality," Icelandic President Gudni Johannesson had told AFP.

Unlike some other countries, Iceland does not have legal quotas on female representation in parliament, though some parties do require a minimum number of candidates to be women.

Around the world, five other countries currently have...