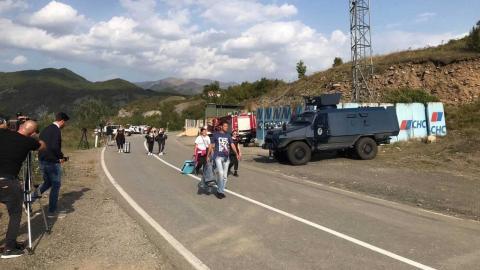 The blockade of two border crossing points between Kosovo and Serbia by Kosovo Serbs protesting against new measures on vehicle licence plates imposed by Albin Kurti's government is now in its eighth consecutive day, with the tensions between the two sides showing no signs of abating.

Srdjan Cvijic from the Open Society European Policy Institute in Brussels told BIRN that the crisis was artificially created, but that it is the most serious since 2011, when Serbs in northern Kosovo burned down the Jarinje border crossing after Pristina introduced an embargo on products from Serbia and tried to take over the crossing using special police units.

"The crisis is fake, because there will not be any war, but the biggest problem after this will be to build the fragile trust between ordinary people who live in Kosovo," Cvijic told BIRN.

"On both sides, opinion-formers are spreading a poisonous atmosphere, and this rattling of weapons frightens ordinary people. How people from the [Serb-majority] north of Kosovo will find a common language with the rest of the population of Kosovo, I think that is the key problem," he said.

Cvijic added that Kurti should impose new licence plate regulations with more subtility and understanding for local Serbs, and not to confiscate over night the licence plates that 80 percent of drivers in North Kosovo use.

"If he had done that, the Serbian regime could not have used this to escalate a conflict," he said.

Kosovo analyst Agon Maliqi there is "no sincere wish for dialogue either in Kosovo or in Serbia and there isn't the necessary energy from the West to provide the impetus in moving forward the EU integration process".

He said that in the current situation, the ongoing EU-facilitated...