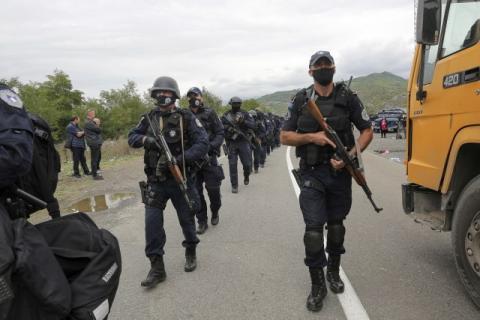 There are no indications of an imminent solution on the ground. Members of the special unit of the Kosovo Police are not withdrawing. Due to their presence, Serbs are not withdrawing either.
Serbs from the north of Kosovo and Metohija spent another night on the Raska-Leposavic road, gathered by the fire and around the tent, where they peacefully protested against the government's measures in Pristina.
They are determined to stay there until their demands are met, for the special units of the Kosovo Police to withdraw from the administrative crossings and for the Interim Pristina institutions to withdraw the measures related to the registration plates of vehicles coming from central Serbia and northern Kosovo and Metohija.
The administrative crossings of Jarinje and Brnjak are closed to traffic and can only be crossed on foot. The night at the administrative crossings passed peacefully, and so it was yesterday. Yesterday, planes of the Serbian Army, and then KFOR, flew over the area around Brnjak and Jarinje along the administrative line on several occasions, in order to monitor security situation.

Albanian Prime Minister Edi Rama will visit Kosovo today, where, as announced, he will discuss tensions in the north of Kosovo and Metohija with the representatives of the temporary Pristina institutions, but also about the Open Balkans initiative.
Rama is coming to Pristina from New York, where he participated in the UN General Assembly, and during his stay in Kosovo, he will meet with Prime Minister Albin Kurti, as well as with the leaders of the three opposition parties, reports "Zeri". Pristina media report that a meeting between the Prime Minister of Albania and the President of the lnterim...