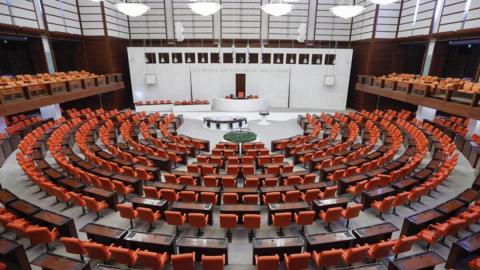 Turkey's parliament is set to return from a two-and-a-half-month recess this week with a heavy agenda awaiting lawmakers, including the Paris climate deal.

Lawmakers will convene on Oct. 1 following the summer recess in a special session. President Recep Tayyip Erdoğan is expected to address parliament at the start of the new legislative term.

Newly appointed Education Minister Mahmut Özer will take oath and the general assembly of parliament will adjourn.
Political parties will hold their parliamentary group meetings in the following week on Oct. 5.

Some 584 lawmakers from political groupings represented in parliament will tackle a number of key issues in the coming months.

Erdoğan last week announced that the Paris climate pact would be presented to parliament for approval in October.

"We intend to complete the ratification phase of the 'carbon neutral' agreement before the United Nations Climate Change Conference in Glasgow," Erdoğan stated, addressing the leaders at the 76th General Assembly of the United Nations.

Meanwhile, the central government budget for 2022 should be submitted by Oct. 17. The budget proposal will first be forwarded to the planning and budget commission and then will be discussed at the general assembly.

Parliament is also expected to discuss a bill, which foresees changes to the election law and a proposal to lower the election threshold to 7 percent.

Another important item on parliament's agenda will be the social media law proposal.