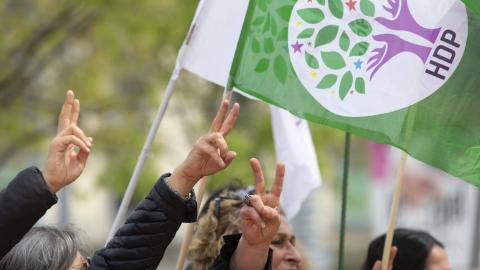 "Regardless of whether the presidential candidate is affiliated with the HDP or not, we believe that we need to discuss principles and methods rather than the names of potential candidates,"  the HDP declaration said.

The HDP said it is not looking to join any current political alliance but called for a wider Democracy Alliance to ensure Turkey's democratic transformation.

The 11-point declaration also includes calls for peace, justice, greener politics, equality for women and youth, a new democratic constitution and a democratic resolution for the Kurdish issue in the country.

"We want to change the executive presidential system together with the structures that feed it, which we believe seeks to make arbitrariness and tyranny institutionalised and permanent and is thus the primary reason behind the multiple crises and the deadlock we face," it said.

It also underlines the importance of Kurdish votes at the next elections.

"Within this context, the contemporary situation necessitates achieving a principled consensus for the presidential elections, as HDP voters have a key role in determining the country's future," it added.

Turkey's pro-Kurdish party further called for peaceful solutions to be sought instead of war between the Turkish state and the outlawed Kurdistan Workers' Party, PKK which has been fighting for greater Kurdish autonomy.

The next presidential and parliamentary elections are due to be held in June 2023 at the latest, although some observers believe that snap polls could be called earlier.

According to recent opinion surveys, the opposition alliance and President Erdogan's ruling...