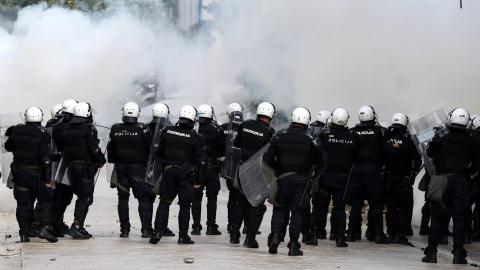 Protesters clash with police during a protest against the enthronement of Serbian Orthodox Metropolitan Joanikije in Cetinje, Montenegro on September 5. Photo: EPA-EFE/BORIS PEJOVIC

During the session of the parliamentary security and defence council, Abazovic called on the Special State Prosecutor to investigate the organisers of the protests.

"There was a risk to the life of Patriarch Porfirije with his arrival in Cetinje. I stand behind these claims and this will be proven. But I don't have information that someone planned to use a sniper," said Abazovic.

"There were criminals and former police officers among the protesters, and their goal was to destabilise Montenegro. Some of them were armed and those people have to be prosecuted," he added.

At the violent protest in Cetinje on September 5, opposition supporters and self-declared patriotic groups clashed with police while trying to stop the enthronement of Metropolitan Joanikije in Montenegro's old royal capital, which the protesters claimed was an insult to their country's struggle for sovereignty.

Police had to remove roadblocks erected near Cetinje that were designed to stop clerics from reaching the town for the ceremony, while the Serbian Orthodox Church Patriarch Porfirije and the new Metropolitan Joanikije were transported to Cetinje monastery by army helicopter and then protected with bulletproof shields.

The head of Montenegro's Police Directorate, Zoran Brdjanin said on Monday that some of the protesters had planned to cause unrest.

"There were plans for provoking violence and we have evidence about everything," said Brdjanin.

On September 5, Patriarch Porfirije claimed that Orthodox Church clerics' lives had been in danger before the ceremony.