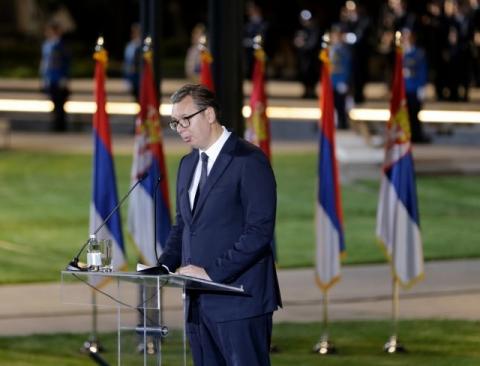 "I think I have always had a serious attitude on that issue. Vaccination is the most important," he said.
He added that he managed to convince many to get vaccinated, but that he could not do everything.
"We have provided various types of vaccines. Moderna - the fifth vaccine will arrive soon," he emphasized and added that our production of the Russian vaccine will soon appear, and then the Chinese one produced locally.
"I never do anything for the elections. That's what people who start from themselves say. They have been saying for four years that we are constantly in the campaign. I don't see Serbia as it will look in March, but as it will look like in 2025, 2030, because I'm more interested in Serbia than who will be in power", Vui was clear.
He also said: "I am strongly in favor of the vaccination, but I can't violate the supreme legislative act. I can't lock people in the ghetto because they didn't want to be vaccinated. I can't force soldiers to get vaccinated, and there are 15-18% who have not been vaccinated yet".

About the statement of Sasa Jankovic

Commenting on the results of Serbia, he said that Serbia has overtaken Montenegro.

"What would this suit someone? We have everything that a country needs," said Vui and emphasized that he does not deal with neighbors, but that it is normal to measure results, as well as to cooperate with each other.

President Vui commented on Sasa Jankovi's statements and the claims that he "works for him".
"I neither saw him nor heard from him. He received the most votes after me in the presidential election. This is planning a coup d'etat that he described. It is important to me here that you just see that this is true. He heard it from several ambassadors", he said...