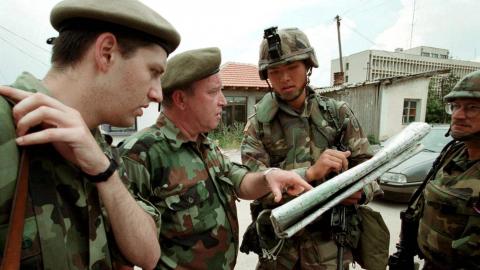 Serbia has already asked for the archives of the Kosovo Liberation Army to be opened up so that the bodies of Serbs who disappeared can finally be found.

The head of Belgrade's delegation, the director of the Serbian government's office for Kosovo, Petar Petkovic, said after the meeting that "we seem to have made progress".

But it was unclear whether this 'progress' had anything to do with the wartime archives, or whether any agreement on the subject had been reached at all.

After the vaguely optimistic rhetoric that followed the meeting on September 9, recriminations resumed.

Kurti also insisted that Kosovo has nothing to hide: "We have the archives of our country, which include those of the KLA as well, and all evidence and materials belonging to the KLA. We are very open and transparent. Since 1999, we have been under international supervision and you cannot find a country that is more open in terms of archives," he said.

However, others in Kosovo have insisted that the KLA had no archives as it was a guerrilla force. For its part, Serbia has classified some of the Yugoslav Army's archives as state secrets.

BIRN has checked the assertions made by both sides in an attempt to gauge whether or not any significant progress is likely to be made in the search for the remaining wartime missing persons as a result of the Brussels meeting.