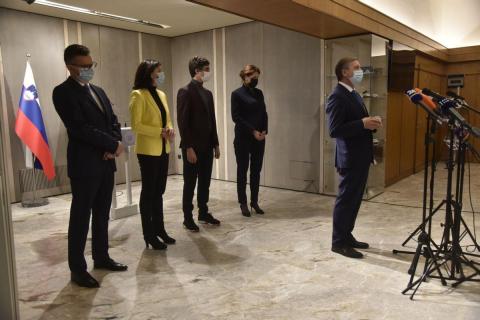 Ljubljana – The heads of four centre-left opposition parties signed an agreement on post-election cooperation in Ljubljana on Tuesday. The deal will be a basis for further active cooperation, and for common programmes, which is to pave the way for the forming of an efficient and development-oriented government.

The signatories, the Marjan Šarec List (LMŠ), Social Democrats (SD), Left and Alenka Bratušek Party (SAB), committed in the agreement to forming a government together after the election.

The prime minister will be the head of the party with the best election result, says the agreement.

However, each party will run individually in the election with its own candidates and programmes.

Other parties can be invited to join the government coalition after the election if all four parties give their consent.

“The main purpose of the agreement is to work together for the benefit of Slovenia and calming the current situation in the country, returning to our constitutional foundations and European values and consistent honouring of democratic institutions and media freedom, which are endangered by the destructive, anti-democratic and extreme right policy of the current government,” the agreement reads.

It also lists ten principles that the signatories support, including a more efficient, more consistent and expert-based dealing with the Covid-19 pandemic, and the inviolability of the separation of powers.

The four partners also committed to strengthening independent institutions that are crucial for the transparent functioning of the society and public media, NGOs, civil society and to depoliticising the national and security systems.

One of the key points is also fight against poverty, inequality and social exclusion, and investing in quality and accessible systems of healthcare, education and long-term care rather than leaving these services to private initiative and free market.

The parties will also strive for stable jobs and jobs with higher added value and for predictable business environment with financial incentives for a creative breakthrough.

Another goal will be to return established experts into key state institutions and eradicate corruption among top officials.

The four parties also intend to increase funding of science and culture, and stop insensible investments in defence.

The agreement also announces systemic solutions for Slovenia’s meeting of the EU green deal and digital transformation, and realisation of major EU-funded development and infrastructural projects.

Another key point of the agreement is a committent to lower greenhouse gases and preserve biodiversity as a key guideline in environmental, social, economic and infrastructural policies.