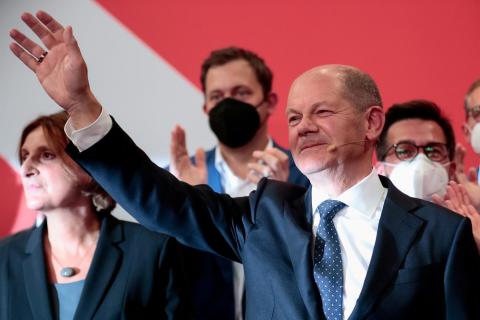 Finance Minister Olaf Scholz, who led the Social Democrats' (SPD) campaign, said Europe's biggest power would not be thrown off by the power struggle, stressing that Germany would remain "stable" even as parties scramble for coalition partners.

But the country pivotal in shaping Europe's responses on issues from the coronavirus pandemic to relations with Russia and China, risks being put out of play on the international scene for some time, just as the upcoming COP26 climate summit will be demanding action from the world's biggest powers.

Europe's largest economy will also hold the presidency of the G7 club of rich nations next year, and will need a government capable of setting the international agenda.

Washington said on Sept. 26 it hoped to maintain strong relations with Berlin while parties battle to build a new government.

The United States will "await the outcome of negotiations to form the next German government. We also look forward to continuing our strong partnership with Germany on many key issues of mutual concern," said State Department deputy spokeswoman Jalina Porter.