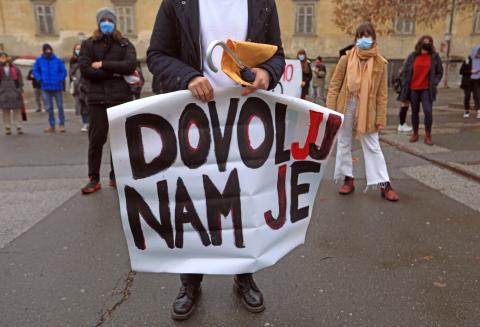 Trbovlje – The government cabinet had to face protesters during their visit to Zasavje region on Tuesday, as several hundred of loud and occasionally rowdy protesters gathered in front of the Delavski Dom, where a public debate is currently taking place.

Some protesters tried to enter the building but were prevented from doing that by riot police, who lined up to protect the entrance.

Protesters were chanting anti-government slogans, labelled the authorities mafia and said that Prime Minister Janez Janša was not welcome in their midst.

Public broadcaster TV Slovenija reported some 600 protesters has turned up in a city that has a population of almost 14,000.

The post Government met with protest in Trbovlje appeared first on Slovenia Times.