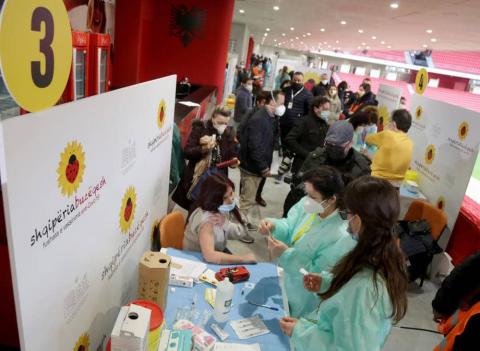 Serbia was the first country that made vaccination mandatory for police officers and members of the armed forces in May, followed by Greece and Hungary, which made jabs compulsory for the healthcare sector.

Albania then made vaccination mandatory in late August for health workers, teachers and students.

In Serbia, mandatory vaccination for medical workers has been discussed, but so far not implemented.

Serbian Prime Minister Ana Brnabic said on September 2 that the introduction of obligatory vaccination for health workers would create other problems for Serbia and eventually lead to a case being brought to the European Court of Human Rights in Strasbourg.

Brnabic added that if compulsory vaccination was imposed in the healthcare sector, it would lead to the dismissal of 20 per cent of health workers who do not want to be vaccinated for whatever reason.

"Then you have [problems with trade] unions, 'human rights' and the 300 other wonders that come with that. That is why I think there is another way for common sense and rationality to win out," Brnabic said.

Despite Brnabic's concerns that mandatory vaccination could be seen as a breach of people's human rights, some legal experts have claimed that Serbia's constitution and laws are broad enough to allow it in a pandemic situation.

Although the vaccination process in Serbia started much earlier than in many other countries, so far only around 53 per cent of people over 18 have been fully vaccinated.

A law went into force in Greece on July 5 that requires doctors, nurses and all health personnel to be vaccinated, as well as workers employed at homecare centres for elderly people.

Thirty healthcare workers appealed to the European Court of Human Rights to...