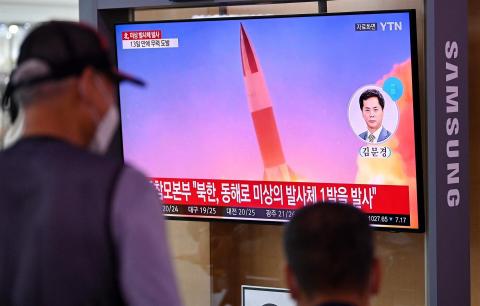 Nuclear-armed North Korea fired what appeared to be a short-range missile into the sea on Sept. 28, the South's military said, as Pyongyang's U.N. ambassador insisted it had an undeniable right to test its weapons.

The projectile was fired from the northern province of Jagang into waters off the east coast, according to the South's Joint Chiefs of Staff, and a Japanese defense ministry spokesman told AFP it "appears to be a ballistic missile".

Less than an hour later, Pyongyang's United Nations ambassador Kim Song told the U.N. General Assembly in New York: "Nobody can deny the right to self-defense for the DPRK", the North's official name.

It is the latest in a series of mixed messages from Pyongyang, coming days after leader Kim Jong Un's influential sister Kim Yo Jong, a key adviser to her brother, dangled the prospect of an inter-Korean summit.

But she insisted that "impartiality" and mutual respect would be required, calling for the South to "stop spouting an impudent remark".

She condemned as "double standards" South Korean and U.S. criticism of the North's military developments, while the allies build up their own capacities.

Washington condemned the North's latest launch, calling it a "threat" to Pyongyang's neighbors and the international community.

"This launch is in violation of multiple U.N. Security Council Resolutions," the U.S. State Department said in a statement, adding: "Our commitment to the defense of the Republic of Korea and Japan remains ironclad."

In recent days, South Korean President Moon Jae-in, who has only months left in office, reiterated at the U.N. General Assembly his longstanding calls for a formal declaration of an end to the Korean War.

The North invaded the South in...