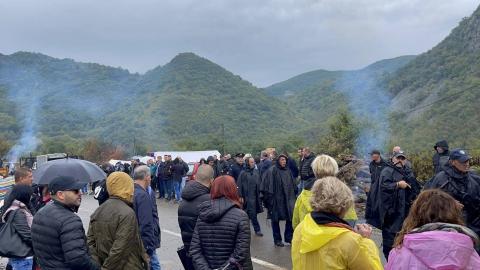 If the protests go on, basic supplies to north Kosovo will be affected and could create "a humanitarian crisis," he said.

Protesters put up a tent at the Jarinje border crossing on Monday. Photo: Valon Fana/BIRN

In 2011, three years after Kosovo declared independence, Kosovo and Serbia reached an agreement by which Kosovo authorities would issue licence plates marked 'RKS' and, in a concession to Serbia's refusal to recognise its former province as a state, 'KS', denoting simply 'Kosovo'. The move was aimed at encouraging Serbs in the north to start using Kosovo-issued plates, but many did not bother.

In 2016, Kosovo extended the validity of KS plates for another five years. When the measure expired on September 15, Kurti's government decided against extending it and announced as well that it would require the removal of Serbian-issued licence plates for cities in Serbia and their replacement with temporary Kosovo plates.

The decree, the government argues, reflects what Serbia has been doing for the past two decades - requiring drivers with Kosovo-issued plates to take temporary plates on entering Serbia.

Prior to the decree, Markovic said, a couple of thousand Serbs in the north drove cars on Serbian-issued licence plates and "practically functioned within the limits of the grey zone tolerated by everyone."

Now, the new regulation, which Markovic described as "partially precise", renders vehicles with such plates "practically illegal in Kosovo due to the fact that under Kosovo law it is almost impossible to replace them with RKS [Republic of Kosovo] plates," because the Serbian ones are not recognised in Kosovo

Serbia, for its part, does not recognise RKS plates and...