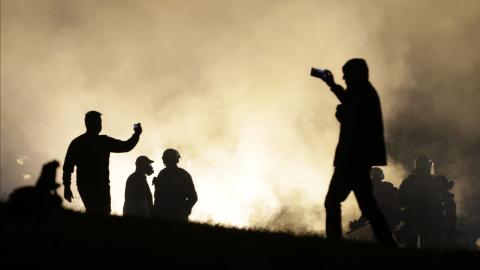 Serbia's parties began to focus solely on acquiring votes. Ideology became peripheral. Today, most parties in Serbia support more or less the same values: EU integration, human rights, raising living standards and the fight against corruption; the status of Kosovo remains potentially inflammatory for the party elites since most Serbian citizens are against recognizing Kosovo's independence. Not a word about ideology…

COVID-19 acts as springboard for far-Left

A protestor waves a flag reading 'My body - my choice' during a protest against possible COVID-19 restrictions announced by the government in Belgrade. Photo: EPA-EFE/ANDREJ CUKIC

Things are different once we step out of mainstream politics and enter the slippery zone of extremism. Here the division between the extreme Left and Right becomes clearer, each having its own distinct values.

In Serbia, the modern far-Right has been active since the conflicts of the 1990s, while the extreme Left was considered non-existent until recently. But COVID-19 has served as a springboard for Left-wing extremists, who have been increasingly outspoken on social networks and through their activism.

This is particularly visible in the context of the migrant crisis when various non-parliamentary Right-wing groups protested in the streets of Belgrade against the settlement of migrants in Serbia. In a strong ideological response, Left-wingers from the civil sector stood in defence of the migrants.

Ultimately, police had to intervene to prevent not just a clash of ideas, but a physical confrontation.

A second, equally controversial issue in Serbian society that has caused intense disputes between the extreme Left and Right is LGBT rights (an issue that is almost obsolete...