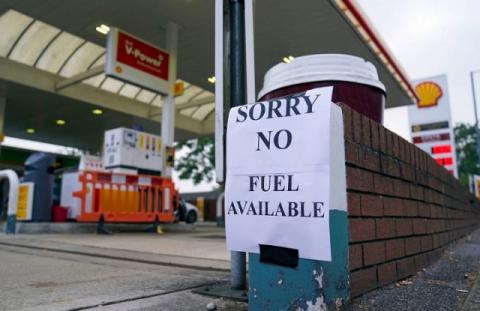 exacerbated fuel shortage crisis In the UK over the weekend amid "panic buying" from motorists so anxious that the government announced on Monday evening, it had asked the military to stand by for deliveries if needed.

The Ministry of Energy said in a statement on Monday evening, "A limited number of military tanker drivers will be put on alert and deployed if necessary to further stabilize the fuel supply chain."

Despite the government's call on the population not to panic, they flocked to gas stations, while some companies indicated that they are facing difficulties in delivery that affect the supply of food in supermarkets, as a result of the repercussions of Covid and Britain's exit from the European Union.

Also, at a station in Leyton, a neighborhood in east London, 50 cars lined up from 06:30 on Monday, while some consumers spent part of the night waiting for fuel, according to Agence France-Presse.

Across the country, "No fuel" signs or pumps covered with a sign saying "Out of service" are up, including about 30% of the giant British Petroleum (BP) stations affected by the crisis. The situation is also reminiscent of the 1970s, when an energy crisis caused fuel rationing and cut the working week to three days. Two decades ago, protests against rising fuel prices led to the closure of refineries and paralyzed activity in the country for weeks. Temporary visas

Under pressure, the government decided Saturday to adjust its post-Brexit immigration policy and grant up to 10,500 temporary work visas, from October to December, to make up for a severe shortage of truck drivers and staff in key sectors of the British economy, such as poultry farming.

Also, the government has temporarily...