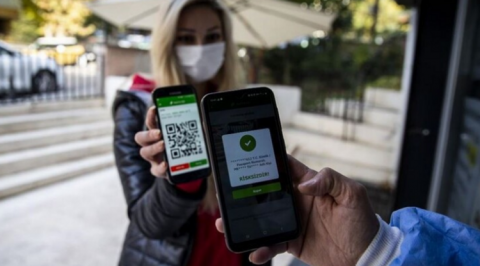 Turkey is considering taking two vital steps in the fight against the pandemic as citizens may be asked to present their vaccine cards to enter certain places and the Turkish COVID-19 vaccine, Turkovac, will be promoted in a bid to stall vaccine hesitancy.

According to the first phase of the action plan authorities call "winter plan against COVID-19," vaccine cards will be mandatory to enter public places rather than the HES code, the Turkish coronavirus contact tracing system, which shows if people are "risk-free" or not.

People will only be able to enter shopping malls, restaurants, cafes and some other confined spaces with their vaccine cards, according to a report by the daily Hürriyet.

To encourage people to get vaccinated, the second phase of the "winter plan," an indigenous vaccination campaign, will be put in place.

Turkovac is expected to be in use in November or early December and is planned to be given as a booster shot.

The activation of the indigenous vaccine may quell concerns and increase trust in the COVID-19 jabs, said authorities about Turkovac, which is said to be more effective than the Chinese jab, Sinovac, also an inactivated jab.

Officials said a maximum 300,000 doses of the indigenous vaccine will be produced daily and that a deal with three firms was made.

The Phase 3 trials of the homegrown vaccine have been finished in 30 medical centers across the country. The officials said the Turkovac has shown a higher protection against the U.K. variant of the virus.

Trials against the Delta variant are ongoing, noted the officials.

All eyes are on universities now, where waves of students have physically entered campuses, with officials closely monitoring the situation and whether...