Montenegro Urged to Reopen Investigation into Siege of Dubrovnik 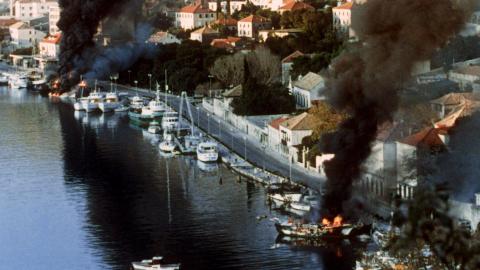 An artillery attack on Dubrovnik by Yugoslav forces in November 1991. Photo: EPA/PETER NORTHALL.

"The attack on Dubrovnik will remain a black spot in recent Montenegrin history, and it is the responsibility of decision-makers to show commitment to identifying and punishing those responsible for the suffering of innocent people," the Podgorica-based Centre for Civic Education NGO said in a statement.

"The Supreme State Prosecutor's Office has ignored all the evidence that has been gathered and treated as meaningless all the facts that indicated command responsibility and political responsibility [for the crimes]," it added.

As part of Yugoslavia, Montenegro took part directly in the wars in Croatia and Bosnia and Herzegovina under the leadership of Slobodan Milosevic, although it saw no conflict on its own soil.

The siege of Dubrovnik was the largest military operation in which Montenegrin soldiers were involved. It was intended to support minority Serbs in Croatia who had rebelled against Croatia's declaration of independence from Yugoslavia.

Dubrovnik's old town, which is a UNESCO world heritage site, suffered considerable damage during the shelling.

In 2000, Milo Djukanovic, then prime minister of Montenegro, formally apologised to Croatia for the suffering and losses that Montenegrin soldiers inflicted, particularly in the Dubrovnik area.

The head of the Human Rights Action NGO, Tea Gorjanc Prelevic, also highlighted on Friday that no criminal proceedings have been launched in Montenegro for war crimes committed during the siege of Dubrovnik.

Gorjanc Prelevic told Vijesti newspaper that "crimes were committed against civilians and private and public property was destroyed without the military necessity to justify...