One photo caused anger and tears throughout the country; "This is Brazil in 2021" 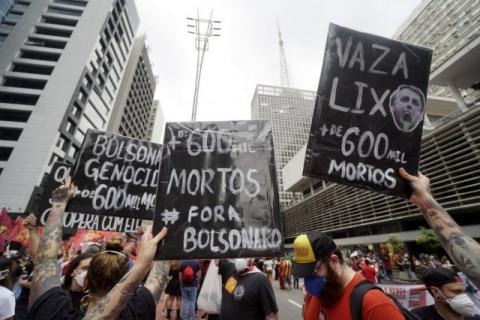 The crisis has affected the most populous nation in Latin America, where millions of people have fallen into poverty due to the coronavirus pandemic and sudden soaring inflation.
Image taken last week in Rio by award-winning photojournalist Domingos Peixoto, show a group of desperate people looking for scrap behind a heavy truck that was transporting discarded internal organs and bones to a pet food and soap factory.
"Some days... I want to cry," truck driver Jos Divino Santos told reporter Rafael Nascimento de Souza.
What exactly is happening in Brazil was best described by Denise da Silva, a 51-year-old cleaner, who said she had to feed her five children and 12 grandchildren alone because her partner had recently passed away. "It's been so long since I've seen some meat. The last time it happened was before the pandemic...", said da Silva.
The photos, one of which appeared on one of the front pages titled "Brazil 2021: The Pain of Hunger," immediately caused public outrage.

Thousands of protesters protested in the streets of Rio on Saturday to condemn the social disaster for which many blame Brazilian right-wing President Jair Bolsonaro.
It is estimated that 19 million Brazilians have been starving since the outbreak of the epidemic, and about 600.000 people have died as a result of COVID-19 infection. In the Brazilian neighborhood, the suffering is even more intense.
Last week, a Venezuelan university...