Tens of thousands march for US abortion rights 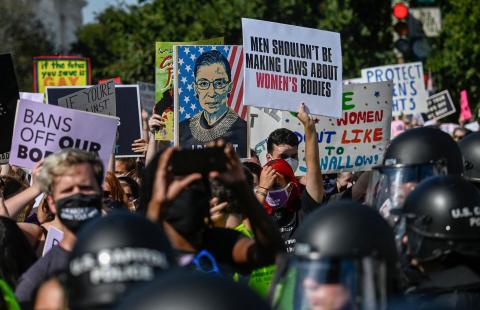 Wearing pink hats and T-shirts and shouting "Hands off my body," tens of thousands of women took to the streets across the United States on Oct. 2 in protests aimed at countering a conservative drive to restrict access to abortions.

In Washington, about 10,000 protesters rallied in a square near the White House under sunny skies before marching to the U.S. Supreme Court, which will have the final say on the contentious issue.

The perennial fight over the procedure in America has become even more intense since a Texas law went into effect September 1 banning almost all abortions, unleashing a fierce counterattack in the courts and Congress, but with few public demonstrations until now.

Two days before the Supreme Court is due to reconvene, the rallies took place in more than 600 cities, according to organizers, who said that hundreds of thousands of people gathered across all 50 states.

"Women are humans, we are full humans, and we need to be treated like full humans," said Laura Bushwitz, a 66-year-old retired Florida teacher protesting in Washington, wearing a dress with portraits of women activists and politicians.

"We should be able to have our own choice on what we want to do with our bodies. Period."

Michaellyn Martinez, a woman in her seventies with closely cropped hair, told AFP she got pregnant at the age of 19, several years before the landmark 1973 Roe v. Wade case, when the Supreme Court guaranteed the right to an abortion up until a fetus is viable outside the womb.