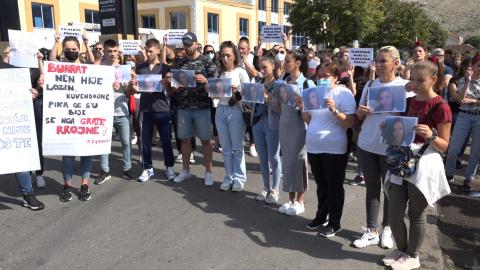 Protests on murder in the town of Tuzi, Montenegro. Photo: Courtesy of TV BOIN

Gjokaj had been on the run since September 30, after he killed his 19-year-old wife and wounded her father in the mainly Albanian-populated towni.

Hundreds of citizens and civic activists joined protests on Sunday in the town over the murder of the young woman - and over official failures to prevent violence against women generally in Montenegro.

The Mayor of Tuzi, Nik Gjeloshaj, criticized the State Prosecution for not protecting young women from domestic violence.

"Sheila already reported her killer to the police over the threats to her life. But the State Prosecutor's Office in Podgorica stated there were no elements of a criminal offence. The prosecution did not react preventively to prevent this crime," Gjelohaj said on Sunday.

On August 26, Bakia reported to the police that her husband was threatening her, saying that, "blood will be spilled if she doesn't come back to him", but the prosecution ruled that there was no evidence of domestic violence.

After activists and state authorities demanded an urgent investigation into the murder, the State Prosecution said it would check the procedure of the Basic State Prosecution over the domestic violence report.

"The European Union is ready to help. If you know someone who suffers from domestic violence, refer them to #excusefamily and free legal aid," Popa posted on Twitter.

Meanwhile, in another domestic crime on October 2, over the border in Albania, a 26-year-old from Dibra, Clinton Pira, killed his Ghanaian girlfriend with a knife and then threw himself from the 8th floor...