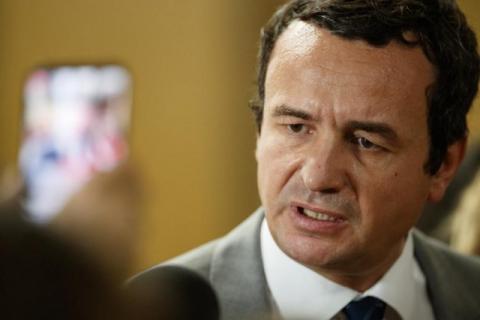 According to Kurti, within full reciprocity, there should be mutual recognition between the so-called Kosovo and Serbia.
"Reciprocity is not revenge, but we believe that it is the principle of good neighborly relations, the concept of equality. Kosovo and Serbia cannot have unequal asymmetric relations, so as an independent state, as a government, we will strive for full reciprocity that would bring justice to the countries' relations, and within this reciprocity, mutual recognition should be the center, that is, for Serbia to recognize Kosovo", Kurti said.
He rejected the accusations of the opposition parties that he was damaging the relations with the USA due to the cancellation of the gas pipeline project, and he confirmed that they are in constant contact with the American MCC.
"The allegations are not true, we are in contact with the MCC, we are also talking about how it is best at this stage to use funds that will help us in our energy policies. So, if we said we need more information and studies, that does not mean that we refused, but it means we are responsible. American funds are welcome and desired, they will be used by our government as well," Kurti said.
On the occasion of the EU-Western Balkans summit in Slovenia, Kurti said that he was interested in agreements in which Kosovo is treated equally and from which the citizens benefit.
"We are open and ready for the best possible neighborly relations, where among these six countries only Serbia doesn't recognize Kosovo, and because of its influence, Bosnia-Herzegovina does not either.
It is interesting that the countries of the Western Balkans that are NATO members recognize Kosovo, so we are for agreements in which we are equally treated, even in terms of diplomas and...