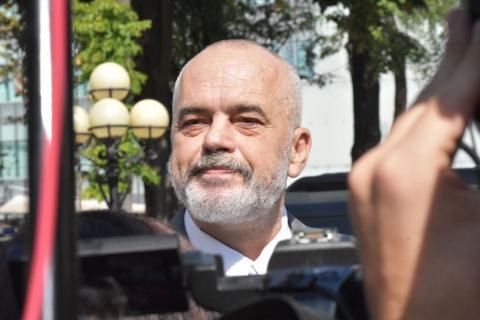 "This new crisis pushes us before a new challenge, as strong as the [2019] earthquake or the pandemic," Rama said in a televised speech ominously titled: "MESSAGE FOR ALL ALBANIANS".

"The astonishing price increases of gas and carbon in all international markets, and the strong trend towards increased oil prices, accompanied by a general increase of prices of day-to-day consumption products, are standing today in front of all countries as shadows of an enemy army, over the horizon of the upcoming difficult winter for the world," Rama declared.

Rama blamed geopolitical factors such as sharp increases of gas prices across Europe, the consequences of the shift toward green power and the shutdown of nuclear powerplants in Germany, among other factors.

Albania gets almost all of its electricity from hydropower and imports part of its needs when rainfall is scarce. This year has seemed a good year with plenty of rain in the first half of the year, when production was higher than consumption, and when some electricity was exported.

However, this has changed lately when dry hydropower plants obliged power companies to import while regional power prices soared. Lately, power prices have jumped to 240 euro per MWh, about five times more than in normal times.

Ornela Liperi, editor of Monitor magazine, told BIRN that while difficulties exist and electricity imports are very expensive for the moment, she believed PM Rama was exaggerating.

"There is a lack of liquidity and expensive imports," Liperi told BIRN...