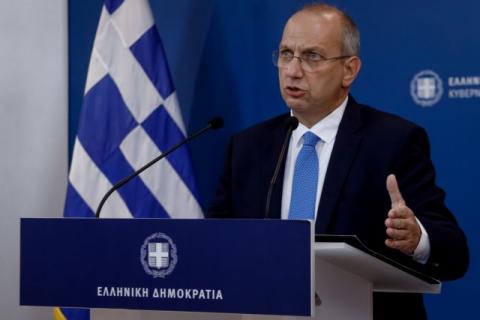 The post concerned a parliamentary question on the issue that Tsipras has tabled and that Prime Minister Kyriakos Mitsotakis will answer next Friday in Parliament.

"The death toll is heavy and Mr. Mitsotakis pretends he does not understand
- 15,000 dead.
- 300 people - an entire village [die] every week.
- The parliamentary question on the pandemic that I tabled can be summarised in three words:
- Enough is enough!"
- Αλέξης Τσίπρας - Alexis Tsipras (@atsipras) October 5, 2021

Economou announced that Tsipras question will be answered next Friday "according to parliamentary procedure", which allows the competent minister to answer a question in lieu of the PM.

Maintaining that Greece proportionately is one of the top two European countries in terms of COVID-19 deaths (300 weekly he said), Venizelos issued a dramatic plea for the government and Greece's scientific community to "tell us what is going on in the country".

SYRIZA attempt to shift the agenda

Economou charged that Tsipras is trying to shift the political agenda, as he has decided that SYRIZA on 7 October will not vote to ratify the recent Greece-France strategic partnership agreement unless it is revised, which is out of the question.

The criticism of the agreement is...