Greece says EU must abide by its migration commitments to Turkey 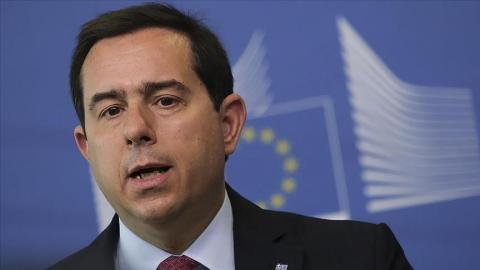 Europeans must honor their commitments to Turkey as part of a migration deal signed in 2016, the Greek minister for migration and asylum said on Oct. 4.

Notis Mitarachi said the EU-Turkey migration deal must be implemented by both sides to manage the refugee flows and stem illegal trafficking in the Aegean Sea.

"The EU has also made promises to Turkey, with regards to visa liberalization and trade, and it must abide by these commitments. And we are expecting Turkey to implement what was agreed upon," he told German daily Die Welt.

Mitarachi argued that Turkey should take back nearly 1,900 failed asylum seekers as part of the agreement, and also called for stronger action against human traffickers.

The EU-Turkey refugee agreement effectively stopped irregular refugee flows into Europe, but Ankara has repeatedly criticized its European partners for not honoring their commitments.

Turkish officials said while Ankara upheld its end of the pact, the EU did not, including not fully providing €6 billion ($7 billion) in aid and backing away from their political commitments.

As part of the deal, the EU had promised to accelerate Turkey's accession process, start negotiations on modernizing the Customs Union, and provide visa-free travel for Turkish nationals within the Schengen area.

Ankara has so far spent more than $40 billion of its own resources for the refugees, and officials underline that the EU should do more to share the burden more equitably.