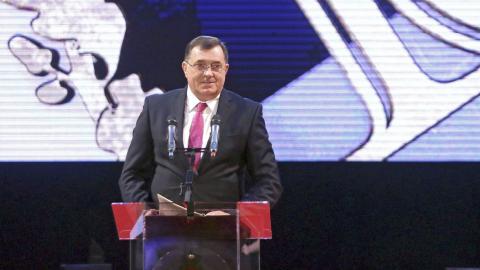 According to Dodik, this could include pulling Bosnian Serb soldiers out of Bosnia's joint armed forces and re-establishing Republika Srpska's own military, as well as withdrawing from the country's indirect taxation system.

These forewarnings are nothing new for Dodik, as he used the same rhetoric to stage his political comeback in 2005, and then to win every election in Republika Srpska since then.

Dodik's speechifying, apparently motivated once again by an upcoming election in 2022, unfortunately never fails to cause many Bosniak (Bosnian Muslim) officials, public figures and media outlets to raise the threat of a new war if Dodik's aspirations materialise.

"Is [Republika Srpska's administrative centre] Banja Luka preparing a war against us?" wrote Tuzla-based journalist Mehmed Pargan in a column for Politicki.ba.

At least part of this rhetoric can be seen as posturing by Bosniak political parties ahead of next year's elections. Countless rounds of this unfortunate tradition of radicalised rhetoric ahead of each election, and the long history of Dodik's (so far empty) threats are being used as an argument by those who have chosen to overlook or downplay the latest incidents.

Nevertheless, many domestic experts and international diplomats, and particularly Bosnian citizens, have become increasingly concerned in the absence of any alternative politics, progressive ideas, or positive and constructive actions from either internal or external actors.