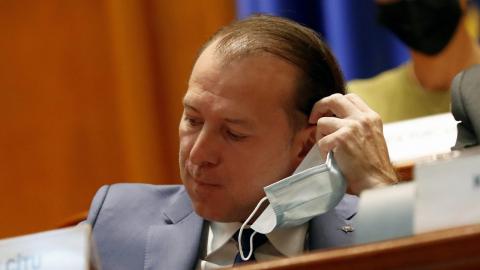 The government of Prime Minister Florin Citu of the National Liberal Party, PNL was toppled on Tuesday after a large majority of MPs backed a no-confidence motion filed last week by the main opposition Social Democratic Party, PSD.

The motion was backed by 281 lawmakers, many more than the 234 required - the most to support a no-confidence vote since the end of Communism in the country.

"The parliament adopts the motion of censure and withdraws the trust granted to the government," said the president of the Chamber of Deputies, the PNL's Ludovic Orban, after the voting process ended.

The vote came after the breakdown of the PNL's governing coalition with the Save Romania Union and the Party of Liberty, Unity and Solidarity, USR PLUS.

USR PLUS withdrew from the coalition after Citu dismissed the party's Justice Minister Stelian Ion from the cabinet.

USR PLUS stated that it would only return to a governing alliance with the PNL after Citu's resignation as premier.

"I should have fired them [from the cabinet] long before. Instead, I tolerated a team of incompetents more than necessary. Eventually, they realized they couldn't do their jobs and left on their own," Citu said.

President Klaus Iohannis will now hold consultations at the Cotroceni Palace with representatives from all parties and then announce a nominee for the next prime minister.

The PNL's Ludovic Orban, a former prime minister, denied rumours that the party will nominate him for the premier's role again.

The ousting of Citu's government comes after he beat Orban in an internal party vote for the PNL leadership on September 25, with President Iohannis's support.